They’re cats without fur, and they’re more diverse than you might assume.

If you’re like most people, your hairless cat breed identification strategy involves a single breed: the Sphynx. Because the Sphynx is so well-known, it’s easy to assume that it’s the only hairless breed on the planet.

The genetic trait is far from common, but it does appear in several breeds. Some are developing or experimental breeds and others are well-established members of the hairless cat community.

In this article, we’ll learn all about hairless cat breeds. You’ll find out more about the history of the genetic mutation, discover how they’re different from their furry cousins, and get to know six amazing hairless breeds. When most people think about hairless cats, they imagine the Sphynx. This breed was originally called the Canadian Hairless cat.

It all started in 1960’s Toronto, when a shorthaired cat named Elizabeth gave birth to a kitten with no fur. A limited gene pool and poor understanding of the hairless genes spelled a struggle. Pioneering the breed took years. The first natural litters of Sphynx kittens were born in Toronto and Minnesota about a decade later. 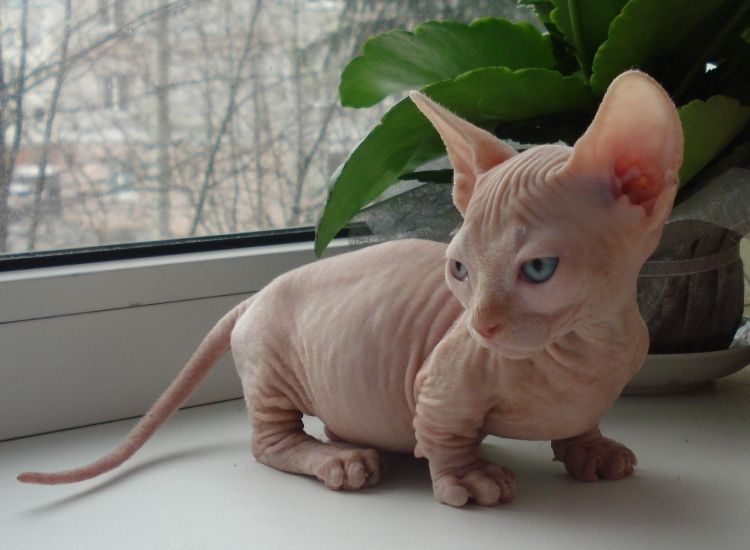 This cat is, essentially, a bald dwarf.

Bambino is an Italian word meaning “baby”. Indeed, if you swaddled this little nugget in a blanket, it could pass as a human infant. This cat is a little chunk of naked kitty on four short legs. They’re the result of breeding between munchkin cats for their dwarfism and Sphynx cats, which lend the Bambino a hairless appearance. The breed is currently considered experimental and is quickly gaining popularity.

Interestingly, the Peterbald possesses an unusually high metabolism and tends to heal more quickly than other cats.

The breed was first created in St. Petersburg, Russia in 1994 and was recognized by TICA in 2009, but is still seldom seen outside of Russia. Also known as the Russian Hairless cat, the Donskoy is physically almost identical to the Sphynx, but genetically distinct. In contrast to the recessive gene found in the Sphynx, the Donskoy has a dominant hairlessness gene.

The breed was created in 1987 and has been recognized by the TICA since 2005. This is an exceptional-looking cat that’s sure to turn heads.

It inherits the hairless body of the Donskoy and crumpled ears of the Scottish Fold. The breed was developed during the first decade of the 21st century, making it a new addition to the cat world.

While it’s popular among Russian and Ukrainian enthusiasts, The Ukrainian Levkoy is currently not recognized by any major international fancier or breeder organizations.

What Are The Origins Of Hairless Cats, And How Did They Become Popular?

It appears that the hairlessness trait first came into the spotlight around the turn of the 20th century. According to E.J Shinick, the cats were given to him by Pueblo Indians in 1902. These cats, according to the natives, were the last of an ancient Aztec breed.

The 1903 publication “The Book of the Cat” quotes correspondence between Mr. Shinick and a Mr. H.C. Brooke:

“A most extraordinary variety, of which next to nothing appears to be known, is the hairless cat, and we cannot do better than quote in extenso the description given by the owner of what, if his surmise should unhappily prove to be correct, was the last pair of these peculiar animals, a portrait of which we give. We can only add, while deeply regretting that Mr. Shinick did not mate his cats, the earnest hope that we may hear that he has discovered the existence of other specimens.”

The term Mexican Hairless Cat was generally accepted for any hairless cat until the early 1930’s, when a French cat (this one fully-furred) gave birth to hairless kittens.

Still, no one successfully bred cats for this genetic abnormality until the 1960’s, which is when the best-known hairless cat breed came into the world. That breed is the Sphynx.

The Sphynx and all other hairless cat breeds have certain common characteristics. Here are some interesting facts and mythbusters related to hairless cats of every breed.

It’s slightly misleading to describe these cats as “hairless”. Hairless cats aren’t completely bald, although they do look naked – they’re covered in a fine layer of fuzz. To the touch, they feel like a cat-sized warm peach or suede hot water bottle.

This idea originates in a misnomer. Hair isn’t the source of allergens – dander is. The allergenic protein is found in cat’s skin and saliva. Because of its close relationship with both saliva and skin, hair carries dander and helps to distribute it around the house.

There is no such thing as an entirely non-allergenic cat.

They’re More Sensitive To Temperature Than Are Other Cats.

Hairless cats can get cold easily – they don’t have fur to keep them warm. For that reason, it’s a good idea to provide coats and jackets. Because human body heat helps to keep them comfortable on cold nights, they’re perfect snugglers and love to crawl under the covers with their people.

In addition to being extra-sensitive to cold, hairless cats are also at risk of becoming sunburned.

Just like humans, hairless cats have sensitive skin that can become both greasy and dry.

Combat dryness by using a gentle, non-toxic moisturizer. Because your hairless cat’s skin will build up some surface oil, you’ll need to wash them about once a week. While bathing the hairless kitty, pay particular attention to the skin folds and other parts of the body. Without protective fur, these cats’ ears, eyes, and paws also tend to accumulate dirt.

Using baby wipes can also help to keep the skin clean between baths.

All About The Majestic Orange Tabby Cats 29 Rarest Cat Breeds & Cat Species You Should Know About One thought on “6 Hairless Cat Breeds That Are Truly Majestic”